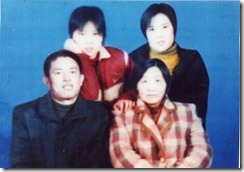 (Wuhan, Hubei–Dec. 14, 2012) The founder of the South China Church, serving a 19-year prison sentence, has suffered a stroke that has left him paralyzed and unable to speak, but prison officials have refused the family’s request to release Gong Shengliang on medical parole.

ChinaAid received an urgent appeal letter Thursday evening from Gong’s family in which they detailed Gong’s condition and their efforts to secure his release on medical parole.  (The full text of the family’s letter and medical parole petition is provided below.)

Gong, who is in his 60s, suffered a stroke at 8 p.m. on Dec. 2 that left him paralyzed on the left side, unable to speak and drooling from his mouth.  It was not until the next afternoon that Gong was taken to a hospital to be treated and to confirm that he had suffered a stroke.  He was then transferred to the Wuhan municipal prison.  Family members were not notified of these developments until Dec. 7, whereupon they immediately asked to go see him.  The prison said that a visit could not be arranged until Monday Dec. 10.

At that meeting, Gong needed the assistance of two people, one on each side to hold him up, in order to enter the visitors room.  When they seated him, he was unable to sit upright and kept sliding off the chair.  He was also drooling and unable to speak.

The next day, the family submitted a request for Gong to be released on medical parole, but was told that his condition did not meet the requirements for medical parole.  Gong’s family had requested medical parole on previous occasions as his health over the years has declined, but had been rejected each time.  His two daughters have also been refused permission to visit their father.

“We ask brothers and sisters from churches everywhere to extend a helping hand to our teacher Gong Shenliang, whose life is at stake, to pray for him…and pay attention (to his case), so that he can be released on medical parole as soon as possible and receive timely treatment,” the family said in the appeal letter received by ChinaAid.

Gong was one of 17 South China Church leaders convicted and sentenced in December 2001 of “using a cult to undermine law enforcement.”  Gong and four others were given the death sentence.  But as a result of the ensuing international outcry initiated by ChinaAid founder and president Bob Fu, a higher court revoked the death sentences in September 2002, citing lack of clarity about certain facts and insufficient evidence.  The case was retried by in October 2002, and instead of the crime of “using a cult,” the five who had been condemned to death were convicted of “intentional assault” and sentenced to life imprisonment. Gong was also convicted of rape. His sentence was commuted in 2006 to 19 years in prison.

See our earlier report on his case: http://www.chinaaid.org/2007/08/jailed-south-china-church-founder.html
The South China Church under Gong’s leadership was a source of controversy because of Gong’s personal conduct and questions about the orthodoxy of some of his teachings.  After Gong’s imprisonment, some church elders left the church and set up independent churches, but the South China Church has continued to meet and has accepted the teaching of other, more orthodox pastors.  Its numbers are slightly lower than the 100,000 members at the time of Gong’s imprisonment.

“Regardless of his past moral issues in the church before his imprisonment, Gong should be treated humanely, in accordance with Chinese law and international standards for treatment of prisoners,”  said  Fu.  “We appeal to the Chinese authorities to grant the Gong family’s  appeal to provide urgent medical treatment for Gong and to allow his two daughters to visit their critically ailing father.”

Fu’s experience and success in advocating for Gong was the impetus for his establishing ChinaAid in 2002 to draw international attention to China’s gross human rights violations against house church Christians, and to monitor and report on religious freedom violations in China.